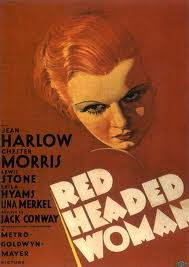 A film with a screenplay by Anita Loos (author of Gentlemen Prefer blondes, no less).

This film is a joy, a camped up over-acted, Pre-Code joy.  Harlow plays the red headed woman of the title, covering her trademark blonde do with a red wig.  Her character is Lilian ("Lil" or "Red") Andrews, an utterly mercenary sort who uses sex as currency in her attempt to cross from the wrong side of the tracks to the right one, and doesn't care who she hurts along the way.

The film opens with Harlow, as "Red" draped across a chaise and with a cheeky wink she makes reference to Loos' novel with the line “So gentlemen prefer blondes, do they?” setting the tone for this racy romp. 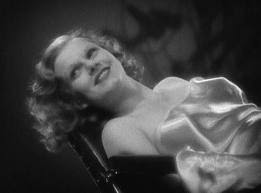 Red lives with her best friend Sally, played by the ever wonderful Una Merkel, and together they ply their charms on seemingly unsuspecting chaps left right and centre.  Red has set her sights on the boss and makes a very deliberate play for him, collecting his post and dropping it off at his house when his wife is in.  She offers to work late and take dictation and when  Mr Bill Legendre is distracted by her shapely legs as she unsubtly hitches up her skirt, she decides to tell him that she loves him. Mr Legendre valiantly fights back but when he sees that she has his photograph clipped to her garter he gives in and soon the pair are discovered kissing by Bill's wife, Irene. 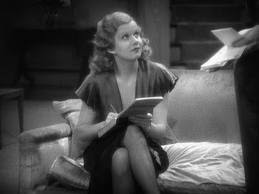 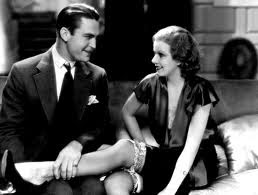 Bill adores Irene, his first love, and tries to persuade Red to leave town and leave him alone but she will have none of it, becoming a full time stalker, following him to restaurants and finally turning up drunk and barging into his house.  Irene finally has enough and leaves Bill, giving clever Red the perfect chance to get her claws into him as he is down.  They live the high life, drunk on booze and sex, and she manages to persuade him to marry her.

Unfortunately marriage to a rich man doesn't bring our Red the glamour and social acceptance she imagined. Bill's friends do not want to associate with her and remain loyal to Irene.  Red finally snaps when she realises that she has been deliberately left off the invitation list for a party and she forces herself into the path of the wealthy Charles Gaerste, a family friend of the Legendre's.  Not knowing her identity, the mature Mr Gaerste falls for her fiery charms and takes her home.  Red threatens Mr Gaerste with exposure of a very different kind unless he helps launch her into society, and out of fear for his reputation he tries his best to get his friends to accept her. 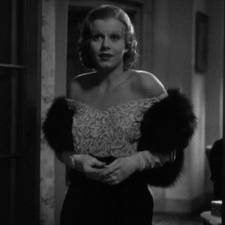 Sadly this fails and the people she so wants to impress just mock her.  Red decides she has to leave town and thrilled to be rid of her Bill sends her to New York.  Once there she launches a full scale assault of Mr Gaerste - it is a miracle his heart held out really.  She intends to marry him, a plan Bill is more than happy to support as he wants Irene back.

Unfortunately it all unravels for Red; Gaerste sees through her and, enraged, she attempts murder.  Failing at that she agrees to leave for good with a particularly good looking chauffeur.  When we last see her she is in the company of an elderly man with her chauffeur pal driving them from the racecourse.  We can only assume she is continuing to exploit men for money and has found herself a handsome accomplice.

Harlow's performance in this movie has received a lot of praise, and it is certainly worth it.  At first look I felt her acting rather wooden, but I realised this was deliberate - Red is an emotionless creature who exists only for herself and this comes over in Harlow's cold style and the very fake crying scenes.  She really does well to make such a one dimensional girl seem interesting, she is fascinating to watch, especially when she turns on her wheedling baby voice to extract what she wants from the men around her.  Another gem is Una Merkel, who always brings a sparkle to a movie and is the voice of reason to all of Red's aspirations.

The weak point is really the story - are we to believe that all these men are so weak and blind as to fall for Red's obvious tricks?  I tend to credit chaps with more intelligence than that, but then I'm hugely out of practise.  Next time I'm on a date I'm going to try a baby voice and see if I end up wed!

This was one of the Pre-Code movies thought to have spurred on the implementation of the Production Code.  Harlow's "Red" was a promiscuous character: a marriage wrecker, having pre marital sex, committing adultery and even, gasp, appearing in public intoxicated and trying to kill a man.  Despite this she effectively gets off scot -free - living an easy life with a man she loves and fleecing old gents out of their dough quite happily.

This isn't a serious movie, it isn't making a point, but neither is it a comedy.  Harlow is excellent in an over the top way and it is well worth seeing just to see her light up the screen with her baby face.  Thoroughly enjoyable.
Posted by Lisa at 13:34

The lady of the house 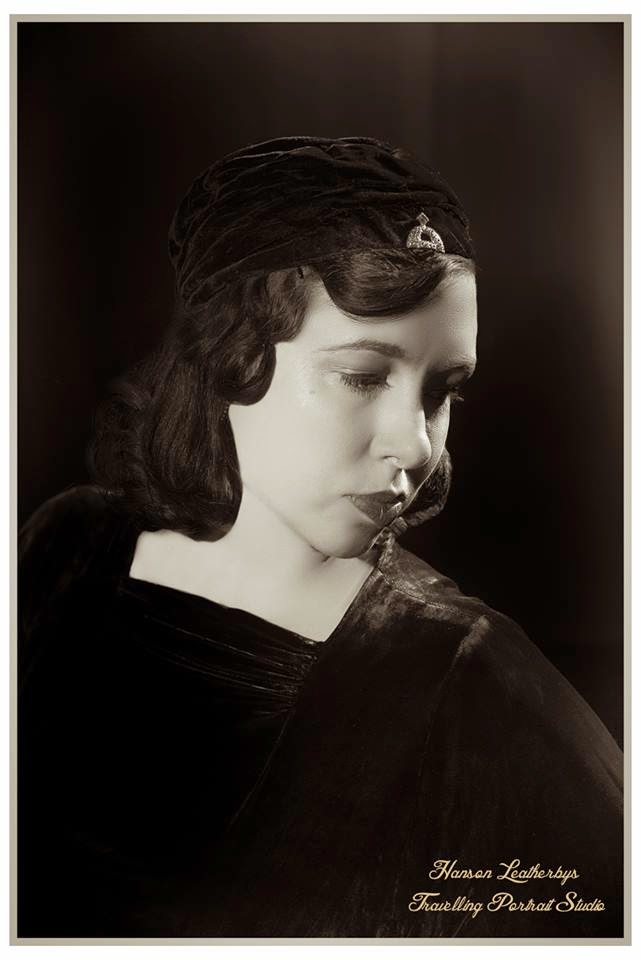